Wish You Were Here!

I crack myself up! Today a bunch of bento buddies on Twitter are having a #twitterfoodparty in which we share our creations on Flickr, twitter, Facebook, and on our blogs. Our theme this month is PASTA! And since we are just days away from Halloween, I had to do a scary pasta bento. It's THE SHINING! 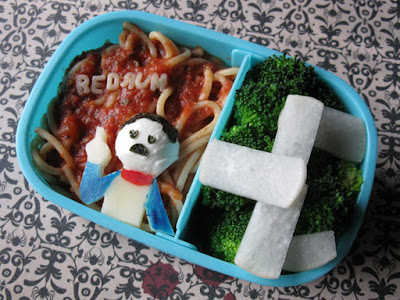 I used spaghetti and tossed it with Pasta Etc.'s delicious marinara sauce. On top of this I placed a few alphabet pasta letters to spell out "REDRUM", which little Danny Torrance says in the film. Or rather, his finger says it in the film. 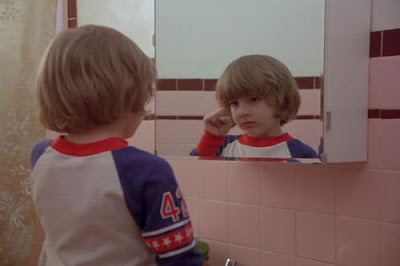 I fashioned Danny out of provolone and fresh mozzarella cheese, with nori eyes, mouth, and hair. I used food color markers to make his baseball t-shirt. 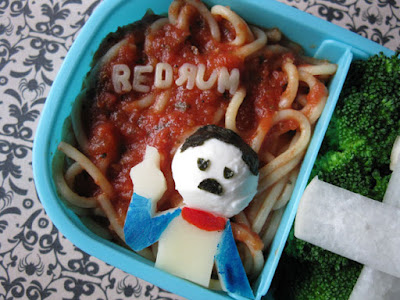 On the other side of the bento is steamed broccoli with slices of white radish on top. This is supposed to represent the snow covered maze at the end of the film. My hubby says it doesn't look like that, but I don't think he was into the spirit of the bento. 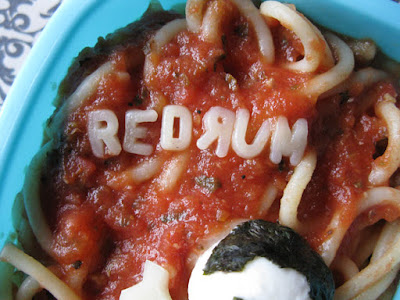 I had planned on watching the movie again for reference, but honestly, the movie scared the heebie jeebies out of me when I first saw it, and I really don't want to watch it again. Yikes! And the name of the bento (Wish You Were Here!) is a reference to the last scene of the movie, (SPOILER) where Jack ends up in the photo of the party guests.
You can check out the other Twitter Pasta Party entries by heading to twitter.com and searching for #twitterpastaparty and #twitterfoodparty. Enjoy!
Posted by Sonoma Bento at 11:16 AM