Temperatures have been climbing in Sonoma County lately, so this is a bento made from leftovers from last night's cold foods dinner: pasta salad and watermelon! 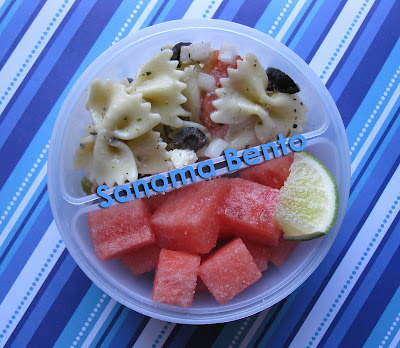 I added sliced olives, fresh mozzarella, tomatoes, onions, and sliced pepperoncini peppers to bow-tie pasta and dressed it with greek salad dressing and a bit of pepper. In the other container are chunks of watermelon sprinkled with a bit of sea salt accompanied by a lime wedge. (If you are having an after hours version of this melon dish, add a little splash of tequila and simple syrup to the watermelon, it's sooooo good!).

I added this bento to What's For Lunch Wednesday! Check it out for great bento ideas. Stay cool bento pals!

Often I am in a bit of a rush, and I need something quick and easy to throw into my bento box. I had two tortillas from La Tortilla Factory leftover in the bread box, and it wasn't enough to make a meal for myself and my hubby, but it's just enough for a bento! 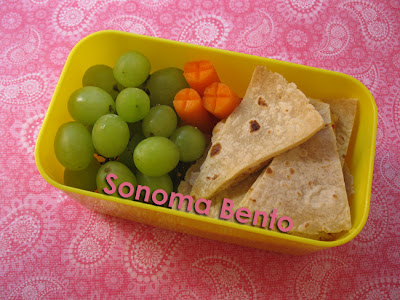 I thinly sliced pepper jack cheese and took a slice of deli turkey meat and placed that between two tortillas in a pan over medium heat. I flipped it after the cheese got melty, then let it cool while I added the grapes and carrots to the bento box. Then I cut up the quesadilla and popped it into the box. A simple bento, and still tasty.

Posted by Sonoma Bento at 10:00 AM No comments:

Leftovers are a great bento ingredient! I had a bit of pork chow mein leftover from our dinner the other night, so I added it to this bento for a tasty lunch. 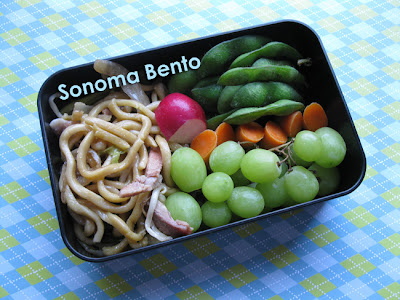 I actually think chow mein is just as tasty cold as it is hot, so this one works as a summer bento too! Also in this lunch: steamed edamame, carrots, grapes, and a little red radish.

Today's bento features a Spanish dish that I was first introduced to in Germany, ha ha! I was on exchange there and some other girls also on the same exchange (but from Spain) cooked up this meal for us called "Tortilla". Now this tortilla is different than the one most of us in the US are used to, namely the corn or flour breads we eat with tacos. 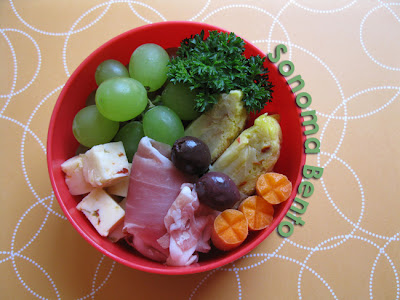 This tortilla is a potato filled omelette. I found a great recipe/tutorial here for making this Spanish staple. You can eat it hot or cold. I had most of the tortilla for dinner with my husband, and used the leftovers in this bento. I added onions and a bit of red bell pepper to the tortilla. Also in this bento: kalamata olives, carrots, prosciutto, jalapeno jack cheese, and grapes, with a little sprig of parsley.

Posted by Sonoma Bento at 12:46 PM No comments: