I was thrilled that my recent trip to Seattle coincided with Makiko Itoh's appearance and book signing at Uwajimaya there. Maki wrote the wildly popular The Just Bento Cookbook: Everyday Lunches To Go which is available on Amazon already in its third printing! I got my copy at Uwajimaya and I looked inside the front cover to see which printing I got, and I think it's the first edition! Wow. 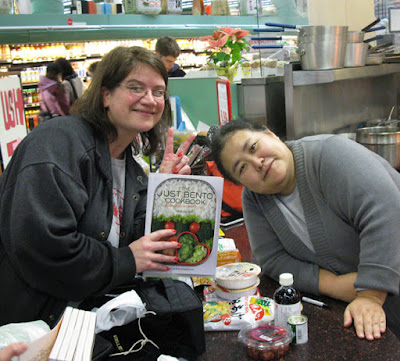 It's me and Maki at Uwajimaya! Maki's husband was nice enough to take this picture of us. Uwajimaya was PACKED that day. I've never seen it so busy. I think it was because they were celebrating some kind of anniversary, and had a free sake tasting later that day. I skipped the sake tasting. :) 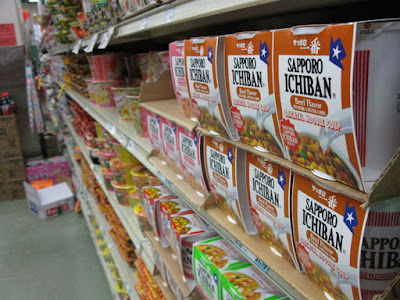 This is my husband's favorite aisle at Uwajimaya: The Ramen Aisle. I have a pic somewhere of him with his arms spread out in the middle of this aisle. It's less like a kid in a candy store, and more like a devotional pose. Very funny. 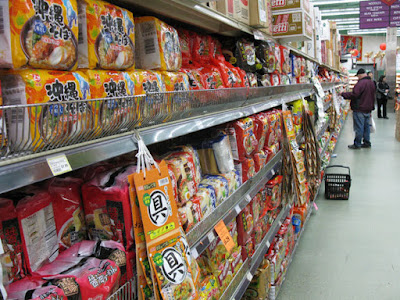 The other side of the ramen aisle, aka Mecca. 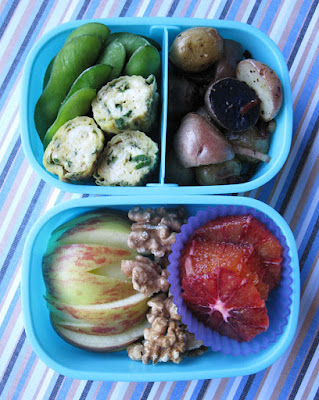 I've only been able to read a few of the bento chapters in Maki's book so far, but one I wanted to try out right away was the Tamagoyaki bento. I added green onion to my Tamagoyaki omelette, which is one of Maki's suggestions. I have a pan made for tamagoyaki which makes it really easy to cook this omelette, but this time I tried rolling it on a sushi mat after it was cooked. It made a nice round tamagoyaki. I can't wait to try more recipes!
Also in this bento: steamed edamame, roasted red, purple, and yellow baby potatoes with pepper and bacon, apple rabbits made with apples from Lambert's Apples, walnuts from the Santa Rosa Original Certified Farmers Market, and slices of blood orange from Twin Peaks.
Posted by Sonoma Bento at 12:03 PM