Sigh, I am sure he didn't do it on purpose, but Mr. Sonoma Bento broke one of my favorite bento boxes. I bid you a fond adieu, Ariel Two-Tiered Bento Box. *sobbing 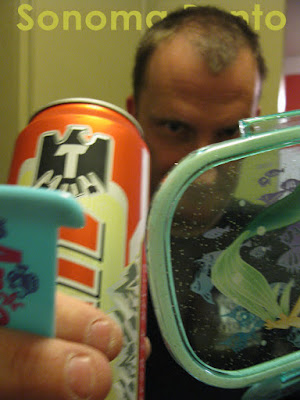 I am kidding, although I did make mean faces at my hubby for about 15 minutes while I was bummed about the loss of this fun bento box. Of course, it cost only about 5 bucks, so it's not a financial blow. But they don't sell them any longer at the Disney Store, and the one I found on eBay is going for 25 dollars. Yeah, I don't think so. (Yes, that's a Tecate beer in his hand. I was determined to get a pic of him shamefully displaying what he did, and he wouldn't put his beer down for the photo.) 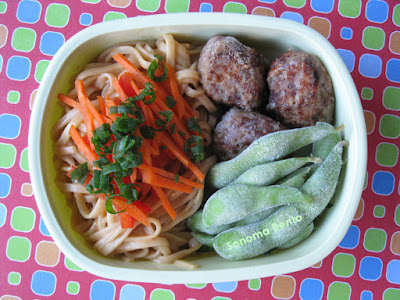 The bento I made in this single tier bento box is pretty straight forward. Udon noodles tossed with a homemade shoyu and peanut sauce with sliced carrots and green onions, frozen Aidell's teriyaki meatballs, and frozen edamame. I decided not to heat up the frozen items this time, since I pack my lunches in the morning and they'll thaw by lunch time.
Beverage Pairing Suggestion: The beer my hubby is holding, to drown my sorrows. :)
Posted by Sonoma Bento at 4:29 PM